The Walt Disney Studios Dedicates Stage A to Sherman Brothers

“Supercalifragilisticexpialidocious” from Mary Poppins, “I Wan’na Be Like You” from The Jungle Book and the delightful theme song for Walt Disney’s Enchanted Tiki Room are just a few of the iconic songs that Disney Legends Richard M. and Robert B. Sherman brought to life at Soundstage A on The Walt Disney Studios lot. On Monday, July 30, The Walt Disney Company recognized these legendary songwriters who are such an important part of the Disney legacy by dedicating the historic stage in their honor. It will now be known as the Sherman Brothers Stage. 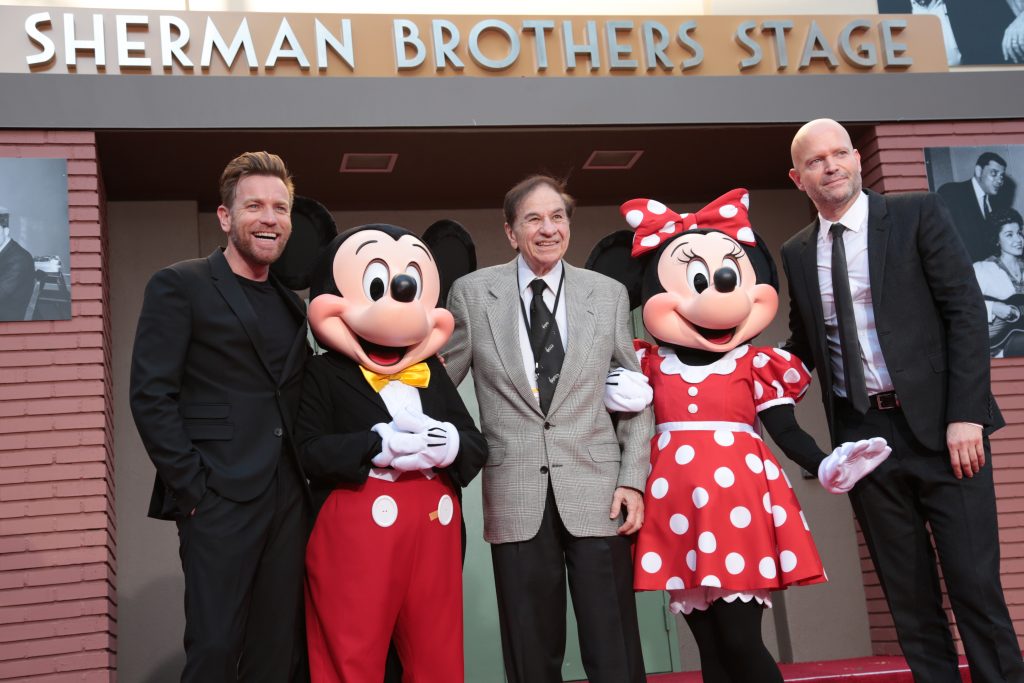 (L-R) Ewan McGregor, Mickey Mouse, Richard M. Sherman, Minnie Mouse and Director Marc Forster pose together at the dedication and re-naming of the historic Orchestra Stage, now the Sherman Brothers Stage A, on the Disney Burbank lot prior to the world premiere of Disney’s ‘Christopher Robin’ at the studio’s Main Theater.

Richard and Robert Sherman’s impact on popular culture is “immeasurable,” said The Walt Disney Studios Chairman Alan Horn at the very special dedication ceremony, which was held ahead of the world premiere for Disney’s Christopher Robin (which opened in theaters on August 3) for which Richard composed three brand-new songs. The film’s stars, Ewan McGregor and Bronte Carmichael, and its director, Marc Foster, attended the festive event, joining actress Lesley Ann Warren, who made her film debut in The Happiest Millionaire, which featured the Sherman brothers’ music, and actor John Stamos, who hosted the Motion Picture Academy’s recent salute to the songwriters. The event on the Burbank lot kicked off with a medley of Sherman brothers’ songs, performed by jazz band Side Street Strutters, before the arrival of Mickey Mouse and Minnie Mouse, accompanied by the Disneyland Band. 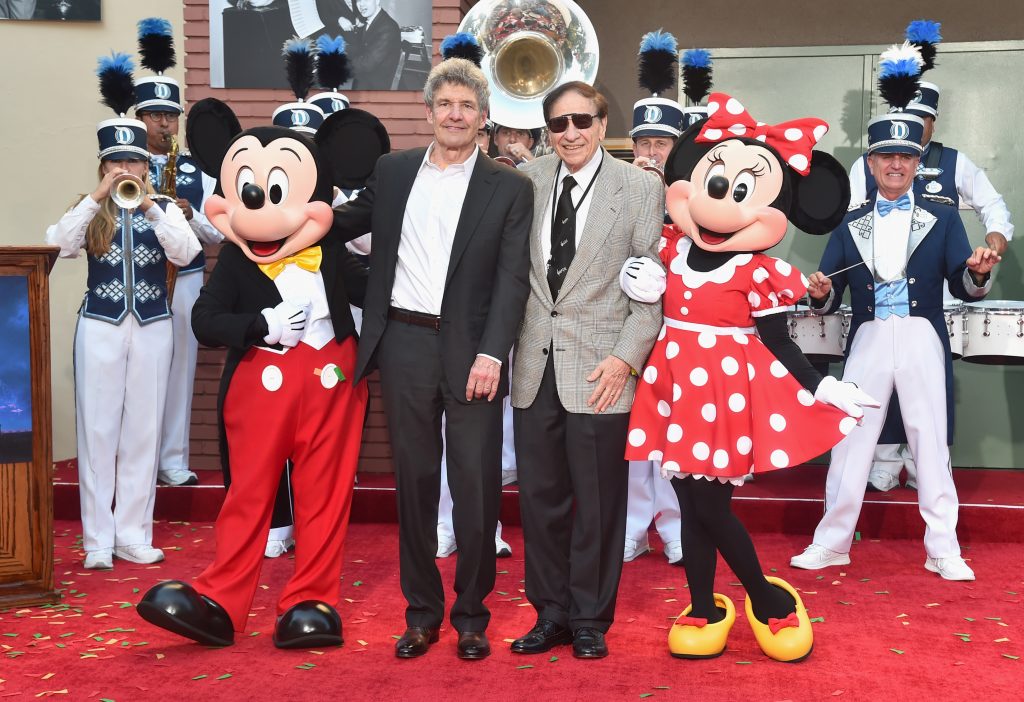 (L-R) Mickey Mouse, Chairman, The Walt Disney Studios, Alan Horn, Songwriter Richard M. Sherman, Minnie Mouse and the Disneyland Band attend the dedication and re-naming of the historic Orchestra Stage, now the Sherman Brothers Stage A, on the Disney Burbank lot prior to the world premiere of Disney’s ‘Christopher Robin’ at the studio’s Main Theater. (Photo by Alberto E. Rodriguez/Getty Images for Disney)

In dedicating the stage to the tremendously talented songwriting brothers, Alan acknowledged not just the partnership between Richard and Robert, but the partnership between the Shermans and the Company. “We often talk about Walt Disney as a visionary, and he was,” Alan said. “He knew something special when he saw it—or, in the case of Robert and Richard Sherman, when he heard it. To Walt, they were ‘the boys,’ and today it’s impossible to imagine The Walt Disney Company without the timeless tunes of these masters of melody.”

Speaking on behalf of Robert (who passed away in 2012) and himself, the guest of honor considers working for Walt Disney and writing songs for his films to be among the greatest honors he has ever had. Richard shared, “This is hallowed ground for me. This was a place where Bob and I had a chance to truly spread our creative wings and to achieve so many wonderful goals that were set for us by this wonderful man named Walt Disney.” Richard emphasized that the brothers’ creative success was aided by the “brilliant, brilliant people” he and Robert worked with through the years, most notably fellow Disney Legends Bill Walsh and Don DaGradi, and, of course, Walt himself. “His great inspiration and his great assignments are the things that made us the Sherman Brothers, that made us what we were.”

D23: The Official Disney Fan Club presented a livestream of the dedication ceremony on their Facebook page, and you can re-live the magical evening in the video here.

*This article has been re-published from Disney Newsreel.*